For Teachers — Guides and Activities

Click on the small pdf icon (below each image) to download your teacher guides. They were all created by teacher and author Natalie Lorenzi, and are amazing resources!

HOW DO YOU WOKKA-WOKKA Teachers' Guide (791 KB) 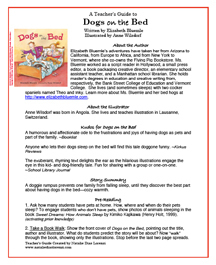 Here's what you do:

Fold a square piece of paper in half so that it makes a triangle.
This is your dog's face (almost).

Next, make a small fold on the bottom, tucking the pointy part under to make the dog's chin. The point should be hidden now.

Now for the tricky part, the ears. It's tempting to fold the two pointy edges (the left and right sides of the triangle) inward toward the face, but you need to angle the points down as you fold so that the ears end up flopping down next to the chin, like they do on a real floppy-eared dog. Otherwise, the ears are pointing into the pup's face.

Now for the decorating.

Glue your googly eyes about 1/3 of the way down from the forehead (some googly eyes can be bought that are self-adhesive; they are the best!).

Glue your pom-pom nose onto the dog's face. This takes patience, because it takes a while for the pom-pom to really stick on.

Draw a short line straight down from the nose and then out to each side, curving up in a big doggy smile.

Add stripes, polka dots, glitter, anything else to glam up your dog.

Finally, write a secret message under the ears.

Your pup card is ready!